Earth, A Special Place in Creation, Part II – Organization of the Universe Based on Physics, i.e., Newton and Mach

Scientific exploration continued at an ever-increasing pace facilitated by improvements in equipment and methods.  About 50-years after Galileo’s work, Physicist Sir Isaac Newton seemed to break the deadlock concerning whether the Earth orbited the sun or vice versa.  In his famous 1687 book, Principia Mathematica, he said the physical “dynamics” required the Earth to revolve around the sun since the sun was bigger and had more gravity. He provided the below illustration: 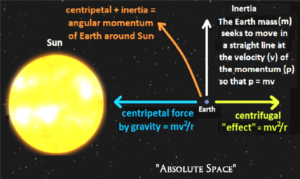 As the sun pulls the Earth inward, the Earth escapes the sun’s gravity by revolving around the sun at the necessary speed to keep away from the sun, but not so fast that it would fly off into space. As Newton put it in his 1684 Scholium: “Thence indeed the Copernican system is proved a priori. For if a common center of gravity is computed for any position of the planets, it either lies in the body of the Sun or will always be very near it…”  The science seemed to be pointing toward a sun-centered Solar System at a minimum.  The secular scientific community was very satisfied with this development. And for the next 150-years Copernicus was unchallenged. Seems it was game, set & match.

In the intervening years continued research opened new areas for exploration and study.  We were starting to get a better grasp of the number of stars, their size and distance from the Earth.  Most astronomers had come to accept that the universe came into existence from a singular event that created time, space and matter in an instant, the Singularity.  Sir Fred Hoyle was the first to use the phrase Big Bang although he opposed the theory on philosophical grounds. He thought it sounded too much like special Creation.  However, the Steady-State (eternal) universe had fallen out of favor.  One reason was that the 2nd Law of Thermodynamics holds in part that, in a closed system, no processes will tend to occur that increase the net organization (or decrease the net entropy) of the system. Thus, the universe taken as a whole is steadily moving toward a state of complete randomness.  There is no way to maintain an eternal, Steady-State universe given the 2nd Law.  In addition, research conducted by Dr. Edwin Hubble and others suggested that the universe was expanding. Expanding from a single point in the universe.  Please see my Facebook post in Creation Corner dated May 8th where I describe Hubble’s discovery and his scramble to devise a rescuing mechanism.  As an aside, I will post a separate article about the Big Bang and its many flaws.  For the purpose of this writing the Big Bang theory (officially known as the Lambda-CDM model) made the universe A-centric, i.e., no center.  Going forward I will refer to the A-centric model as the Copernican Principle.

Back to the story line, about 150 years after Newton created his gravitational equations, along came Ernst Mach.  Mach introduced the concept of “dynamic relativity”. In short, Mach said that Newton decided to favor the Copernican Principle because he ignored the rest of the universe.  If it were included, it would serve as a counter-gravitational force to the sun and allow the Earth to be motionless in the center of the universe, with the stars and sun daily revolving around it.  Mach had this to say about the subject. 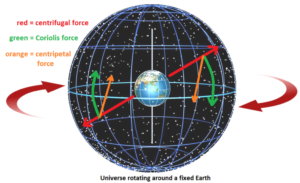 “Obviously, it matters little if we think of the Earth as turning about on its axis, or if we view it at rest while the fixed stars revolve around it. Geometrically these are exactly the same case of a relative rotation of the Earth and the fixed stars with respect to one another All masses, all velocities, thus all forces are relative. There is no basis for us to decide between relative and absolute motion….If there are still modern authors who, through the Newtonian water bucket arguments, allow themselves to be misled into differentiating between relative and absolute motion, they fail to take into account that the world system has been given to us only once, but the Ptolemaic and Copernican views are only our interpretations, but both equally true.”

Abstract. The calculation of the trajectories in the Sun-Earth-Mars system will be performed in two different models, both in the framework of Newtonian mechanics. First model is well-known Copernican system, which assumes the Sun is at rest and all the planets orbit around it. Second one is less-known model developed by Tycho Brahe (1546-1601), according to which the Earth stands still, the Sun orbits around the Earth, and other planets orbit around the Sun. The term “Neo-tychonian system” refers to the assumption that orbits of distant masses around the Earth are synchronized with the Sun’s orbit. It is the aim of this paper to show the kinematical and dynamical equivalence of these systems, under the assumption of Mach’s principle.

Once again we find the neo-Tychonic model to be geometrically equivalent to the Copernican Principle based the dynamic physics of either model.  If you are keeping score, observational evidence tied.  Based on the laws of physics, tied.  Next Part III – Measuring the Movement of the Earth or Lack Thereof.  This is where we start to see Tycho’s model pull away.

By the way, in defense of Sir Isaac Newton’s work, it is worth noting that he had a sense there might be more to the puzzle.  Found in his work papers was a write up called Proposition 43 where he made this profound observation, “In order for the Earth to be at rest in the center of the system of the Sun, Planets, and Comets, there is required both universal gravity and another force in addition that acts on all bodies equally according to the quantity of matter in each of them and is equal and opposite to the accelerative gravity with which the Earth tends to the Sun….Since this force is equal and opposite to its gravity toward the Sun, the Earth can truly remain in equilibrium between these two forces and be at rest. And thus celestial bodies can move around the Earth at rest, as in the Tychonic system.”

Sources and Images: Geocentrism for Dumskies and Smart Kids,