Earth, A Special Place in Creation, Part I – Organization of the Universe Based on Observations

Over the course of the next few posts I will lay out some of the history concerning the competing theories on the organization of the Universe.

One such theory is Geocentrism.  The prefix “Geo” stands for Earth, and the root, “centrism,” means the Earth is fixed in the center of the universe and the sun and stars go around it each day. Geocentrism was the original belief of mankind, having been taught since the dawn of writing around 3000 BC, through the Egyptians and Babylonians, and through the Jews who settled Canaan in 1447 BC. The Persians who conquered the Babylonians; and the Greeks who conquered the Persians, also believed in Geocentrism, and this belief was carried forward mainly by Aristotle, but mostly by the Greek astronomer named Claudius Ptolemy (90-169 A.D.).  For thousands of years the geocentric model was preferred because it fit the reality we experienced, i.e., that the Earth stood still and the heavenly bodies moved across the sky from East to West. 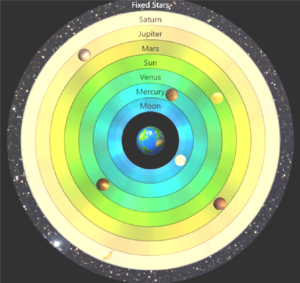 But there was another view that developed among some Greek scholars who followed the teachings of Pythagoras and Aristarchus, both from Samos, around 600 to 300 BC. Pythagoras believed the sun and Earth revolved around a central fire, and Aristarchus believed the Earth revolved around the sun. This belief is called heliocentrism.  The prefix “helio” refers to the sun and the root “centrism” means the sun is fixed in the center. The heliocentric Greeks claimed that if the Earth were made to rotate on its axis every day and the sun were kept fixed in the center, they would see the same sunrise and sunset that the geocentrists saw. Were they right? Well, they were right about one thing. They were right in saying that a rotating Earth would produce the same sunrise and sunset each day as when the sun travels each day around a fixed Earth. The Greeks knew that both the Geocentric and Heliocentric systems could produce the same appearances of sunrise and sunset, but they also knew that only one of them could be the true.  So, the competing Greek models were deemed equivalent and the Aristotle/Ptolemy model was preferred because it was consistent with the teachings of the Church, that is that the God Created the heavens with earth at the center.

In the early 16th Century Nicholas Copernicus suggested the Heliocentric model as a way to bring the calendar into better alignment.  However, the dating issues were not really 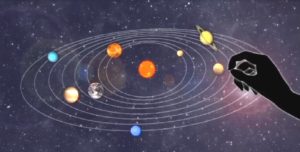 resolved and by 1549 the Church had condemned the Copernican model.  Then along came Galileo Galilei in early 17th Century.  Galileo was an astronomer who was studying the effects of gravity.  You’ll recall the story of how he proved that gravity exerted the same force on objects of differing weights by dropping items from the Tower of Pisa (objects will fall at the same rate unless hindered by air).  Galileo benefited from the ongoing improvement in telescope technology which allowed a deeper view of space.  For instance, Galileo observed that Jupiter had moons and that those moons orbited Jupiter.  Although he didn’t yet understand the physics of his observation, he surmised that since smaller objects like moons orbited a larger object like Jupiter that it is probable that the smaller Earth orbited the larger sun.  However, the reason he advocated the Copernican model was because it better explained the phases of Venus.  Since Ptolemy made Mercury and Venus revolve around the Earth instead of the sun, his model could not produce the phases of Venus that can easily be seen from Earth. Both Copernicus’ and Galileo’s models had Venus revolving around the sun and as a result their model could easily show why Venus had phases.

At this time in history the “Age of Enlightenment” was well underway.  Any scientific discovery that took the Earth out of its special place was attractive to the erudite academics and philosophers.  Galileo’s work was quickly endorsed although the Catholic Church condemned it.  Unfortunately, the work of Tycho Brahe, a Dutch Astronomer was ignored.  Tycho had one of the most advanced Observatories at the time.  He and his assistants made meticulous charts of planetary and stellar movements. He proposed a geocentric model with a twist.  He put the Earth in the center, put the sun in orbit around the Earth and had all the other planets orbit the sun, the Tychonic Model.  This model fixed the Venus phasing issue and made it observationally equivalent to Heliocentric model.  However, there weren’t many willing to champion his model and the Copernican model held serve.

When Tycho died, his assistant of Johannes Kepler obtained Tycho’s library of work.  However, Kepler held to a Heliocentric view and exploited Tycho’s work in that direction.  He devised a method for smoothing out and/or eliminating the need for all the epicycles required in either the Ptolemy or Copernican models.  He made the planet orbits elliptical in nature (oval).  This appeared to be game, set, match for Copernicus.  However, in the late 17th Century an Italian Astronomer named Giovanni Riccioli who was recognized for his expertise with telescopes, tweaked Tyco’s model.  He added elliptical orbits for the planets and now the Tychonic and Copernican models were once again observationally equivalent.  This fact has been conceded to this day.  In the 1995 Scientific American, Dr. George Ellis wrote, “I can construct for you a spherically, symmetrical universe with Earth at the center and you cannot disprove it based on observations”.  However, the philosophical preference for an orbiting Earth has resulted in forcing Tycho’s model into obscurity.

Next up – Part II – Organization of the Universe Based on Physics, i.e., Newton and Mach.