Cosmology, In Search of Occam’s Razor

To review, most astronomers accept that the universe came into existence from a singular event that created time, space and matter in an instant, the Singularity.  Sir Fred Hoyle was the first to use the phrase Big Bang although he opposed it on philosophical grounds.  Secular s 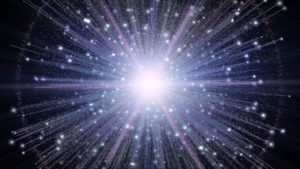 cientists have not coalesced around a particular theory as to what caused the Big Bang or what conditions existed prior to the event.  However, acceptance of the Big Bang seemed to open the door to a discussion of a supernatural cause.  Hence philosophy has entered the conversation to the great consternation of atheist scientists.

In its broadest definition the Big Bang theory holds that time, matter, space and energy all came into being at a finite moment from a central point perhaps smaller than a marble.   In the first second after the universe began, the surrounding temperature was about 10 billion degrees Fahrenheit (5.5 billion Celsius), according to NASA. The cosmos contained a vast array of fundamental particles such as neutrons, electrons and protons. These decayed or combined forming elements as the universe got cooler. Gases evolved from the interaction of decaying and/or combining particles and as the cooling process continued the state of many gases changed to liquid or solids.  Astronomers and theoretical physicists have developed a mathematical formulation to express the nature of the universe.  One of the predictions that flows from the formulation is that the universe is approximately 13.8 billion years old.  Of course the mathematical formulation makes other predictions that can be explored.

One such prediction was that we should be able to find some about of thermal residue from the initial energy of the Big Bang.  In the mid-20th Century scientists were able to measure a thermal residue or energy that appeared to emanate from all directions.  This residue was described as Cosmic Microwave Background Radiation or CMBR.  This observation seemed to fit the prediction fairly well.

As more measurements were collected and analyzed a new issue arose and was labeled the “Horizon Problem”.  You see we took a reading in a certain direction and we obtained a measurement expressed as a temperature.  Then when we took a reading of the universe in the opposite direction and obtained a temperature reading.  The funny thing was that they were getting the same temperature reading from points in the universe that were more than 26 billion light years apart.  This seemed to be a violation of the 2nd law of thermodynamics which among other things states that the energy (heat) within a system will seek equilibrium over time by transferring its energy amongst its component parts.  The universe is not old enough to have achieved this equilibrium.  Secular scientists had 2 options; 1) change the age of the universe or 2) invoke some mechanism that achieved the energy exchange in the available time.

Option 1 would not work because other observations and the mathematical formulation itself set the age at 13.8 billion years.  So, they chose to focus on option 2.  A group of scientists came up with the theory of “Inflation”.  Now the theory of Inflation postulates that almost immediately after the Big Bang event all the matter and energy created expanded at a rate of speed exponentially greater than the speed of light.  But wait you say, I though Albert Einstein said nothing can move faster than the speed of light.  You would be correct, but science needs that burst of supernatural speed to solve the Horizon problem so the mathematical expression for Inflation was added to the Big Bang mathematical formulation (CMB Lamda) and Walla, the equation balanced.

Secular scientists seem ambivalent to the incoherence of their position relative to how the universe came into existence from nothing without a cause or how the physical laws we rely on today were violated to achieve the necessary Inflation.  But this isn’t the end of the “tweaks” that have been made to the mathematical formulation for the Big Bang.

As technology advanced our ability to observe the universe and model our findings increased the pace of research and discoveries dramatically.  Astrophysicists hypothesized something they call dark matter because of discrepancies between the mass of large astronomical objects inferred from their gravitational impact versus the mass calculated from the “luminous (observable) matter” (stars, gas, and dust).  According to consensus among cosmologists, dark matter is composed primarily of a not yet characterized type of subatomic particle.  Think about that for a moment.  There is not enough observable matter in the universe to explain the observations we make relative to the gravitation forces at work.  There must be matter that we cannot observe.  So the existence of dark matter is expressed mathematically and added to the value for observed matter to bring the Big Bang mathematical formulation into balance.  This was also done invoking “dark energy”.  Again, since there is not enough observable energy in the universe to explain observations we add dark energy to the formula as a fix.

At this point, a reasonable person might wonder why scientists hold to a theory that appears to be held together with bubble gum, baling wire and band-aids.  What would they put in its place?  That God created the universe and sustains it?  Not likely.  From a materialistic viewpoint their options seem to be limited.  They can try to go back to the eternal universe argument.  They could jump on the “multi-verse” bandwagon.  Or they can continue to patch and plug the Big Bang until they think up something else.

Unfortunately, they are not going to have time to think up something else.  Scientific observations continue to pour in and research reports are being published that add new difficulties for Big Bang cosmology.  I mentioned earlier that one of the predictions of the Big Bang w 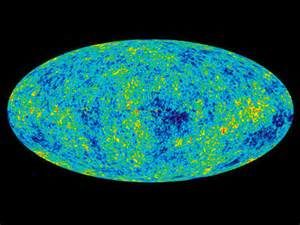 as that the CMBR would emanate from all directions with a consistent or homogenous heat reading.  This was crucial to the Big Bang theory.

In 1989 NASA launched the Cosmic Background Explorer, COBE to take measurements of the CMBR in an effort to map the heat signature of the universe (see map illustration to the left).  As the results were obtained and analyzed much of what was observed was in sync with the Big Bang model.  However, they did observe a peculiar pattern in the distribution of heat in the universe. The Big Bang predicts a homogenous and mostly isotropic universe.  They expected that measurements would show very little variation in the CMBR.  However, the COBE results (illustration to the left) indicated an unpredicted abnormally in the distribution of heat.  The blue ares are cold spots and the yellow/red are hot spots.  Not homogenous at all.  The scientific community chalked this up to inadequate measuring equipment and faulty analytical modeling.

NASA quickly went to work on another explorer with more precisely designed equipment and refined analytical modeling tools.  In June 2001 they launched the Wilkinson Microwave Anisotropy Probe, “WMAP”.  As the results started to come in, a much more detailed picture of the universe emerged.  The problem was that the results were not only consistent with COBE, they were more pronounced (see map illustration below right).  The distribution of heat was not homogenous.  There were warm and cool areas.  These observations falsified a key prediction of the Big Bang, that is, that the universe is homogenous.  It is most decidedly not and WMAP provided evidence of that fact.   However, there was something much more interesting in the modeling results, something that was actually a little frightening to the secular community.  A team of scientists at the University of Michigan issued a report on their WMA 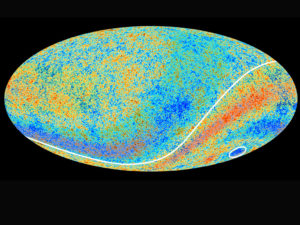 P findings and a related article identified the new abnormality as the “Axis of Evil”.  It seems that the pattern of warm and cool areas could be plotted to form a universal axis in the universe that aligns with the axis of Earth!

What to do, what to do?  Most scientists suggested the equipment was defective and/or that analytical modeling was faulty.  No need to make any changes in the Big Bang model at this time.

So, the European Space Agency went to work on another explorer.  This one was named the Planck explorer.  It used some of the latest equipment and most 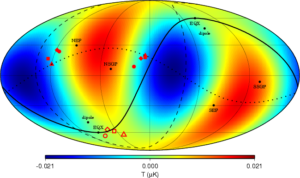 advanced modeling software.  Planck was launched in May of 2009.  The Planck results confirmed with 99.99% confidence that the WMAP results were accurate.  The hot and cold abnormalities exist. See illustration to the left, blue areas cold and red areas hot.

These cold and hot spots orient to indicate a northern and southern hemisphere.  Notice the hemispheric lines indicated in the map. The bold black line is consistent with the Earth’s axis of 23.5 degrees.  It is interesting that the apparent hemispheric alignment of the universe dipoles coincides with the axis of the earth.  There is also a dashed line (- – – -) line running from left to right.  It aligns the Earth/Sun eliptic, wikipedia – “The ecliptic is the plane of Earth’s orbit around the Sun.” Of course that  should read the plane of the Sun’s orbit around the Earth!

At the time of this writing, the scientific community is in their bunkers ferociously working on patches and plugs for the Big Bang.  Or better yet a new theory all together. One that can bring everything into existence without invoking a Creator.

I have a theory.  I believe that God created the heavens and earth.  As the author of all physical laws He uses those laws to sustain heaven and earth.  I believe that He specially created man in His image and that as the crowning jewel of His creation He placed us on earth and set the earth in the most favored location.

Occam’s Razor is a principle that states, when you have two competing theories that make predictions and successfully explain observations, the simpler one is the better.

There is no doubt that Occam’s Razor favors my theory and is much simpler than the Big Bang.