Earth, A Special Place in Creation, Part III – Measuring the Movement of the Earth or Lack Thereof

We now turn our attention to the experiments that have been conducted to show that the Earth moves around the Sun at a speed of 66,600 mph.  That’s right, over 66 thousand miles per hour, that’s over 18 miles per second.

Before we proceed, I need to spent a little time talking about the “Aether” which was a key component in many of the tests that were conducted.  In 1865, James Clerk Maxwell published his treatise, The Dynamical Theory of the Electromagnetic Field. In it, Maxwell posited that there must be a substance through which electromagnetic phenomena occur. He called this substance aether. He described it as consisting of parts and connections that have the property of elasticity and the capacity to propagate waves.  He went on to say, “In several parts of this treatise an attempt has been made to explain electromagnetic phenomena by means of mechanical action transmitted from one body to another by means of a medium occupying the space between them. The undulatory theory of light also assumes the existence of a medium. We have now to show that the properties of the electromagnetic medium are identical with those of the luminiferous medium.”

From Wikipedia – “In the 19th century, luminiferous aether (or ether), meaning light-bearing aether, was a theorized medium for the propagation of light (electromagnetic radiation).

The existence of the aether gave rise to an idea for an experiment.  If it could be determined that the aether created resistance then that resistance could be measured to determine its impact.  This led to a series of increasingly complex experiments starting with Michelson-Morley in 1881 and again in 1887.

Michelson-Morley used an instrument called an interferometer to conduct their experiment.  In most interferometers, light from a single source is split into two beams that travel in different optical paths, which are then combined again at a receiver which measures the amount of interference.  The interference being the result of variances in the optical paths taken relative to assumed aether flow.  This variance is expressed as a fringe shift in the wave.  In the case of the Michelson-M 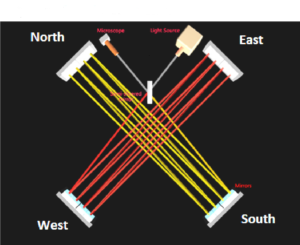 orley experiment, one optical path took one portion of the light beam and moved it in the direction of the Earth’s supposed movement and the other moved perpendicular to it.  See the illustration below.  The hypothesis of the experiment was that the perpendicular beam would arrive at the measuring device before the parallel beam because the parallel beam would be encountering aether resistance, thereby creating a rather significant fringe shift.  The result of the experiment was that the expected fringe shift DID NOT OCCUR.  There was a small amount of shift attributed to measuring imprecisions.  The published results of the experiment were determined to be “Null”.

The result was very perplexing to the scientific community since it suggested that the Earth was not moving.  A concerted effort was made to find a solution to the “Null” result. Hendrik Lorentz and George Francis FitzGerald offered an elegant solution as to how the motion of an absolute aether could be undetectable.  They said it was due to the contraction of the measuring device.  In other words, the measuring device contracted to the same extent that the light wave was retarded.  Although this explanation was promoted to the general public, scientists were not enthusiastic about it. This led most physicists to conclude that this early modern notion of a luminiferous aether was not a useful concept.  In 1905 Albert Einstein’s invented the Special Relativity (SR) theory WHICH showed that he could generate the same mathematics without referring to an aether at all.  In effect he removed the aether altogether so that a Null result would be expected.  However, the lack of a luminiferous aether created other mathematical anomalies particularly as it related to electromagnetism.  Einstein went back to work and in 1915 he invented the General Theory of Relativity (GR) which included an aether, although he stated that it had no real texture.

Michelson-Morley and other scientists continued to conduct interferometer experiments with more precise measuring devices.  More recently sapphire resonators were used to measure aether fringe shift or drifting.  The results achieved through these tests were consistent with the original interferometer experiments.  Einstein, in effect, explained away the Michelson results by asserting his aetherless SR and GR theories.  Science was once again unable to establish a clear winner in the neo-Tychonic versus Copernican models.

Though he was a heliocentrist, Michelson strongly believed in the existence of aether and he never accepted Einstein’s SR theory because it dismissed the concept altogether.  In 1925 he teamed up with Henry Gale to conduct another experiment.  This time rather than try to measure the aether drift as the Earth supposedly orbited the sun, he set the experiment up to measure aether drift related to the daily rotation of the Earth.  The idea of the experiment was that if the Earth is rotating west-to-east, its surface would consistently be moving against the aether, and the aether would travel against the light beam going east-to-west in the tubi 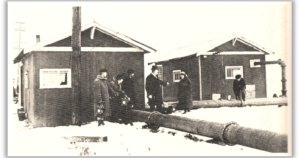 ng. This would cause the light beam to decrease in speed compared to the other light beam in the tube traveling west-to-east, in the same direction as the aether.  The experiment was conducted 269 times over 13-days to make sure the results were as accurate as possible.  Lo and behold, Michelson saw in his viewing scope the fringes he expected to see for a daily rotation between Earth and space.  In other words, the fringe shift expected to result from the daily rotation of the Earth was verified.  That meant that either the Earth was rotating in a 24-hour cycle or the aether was orbiting the Earth every 24-hours.  A New York Times article proclaimed,

Some things never change or as King Solomon said in Eccl 1:9, “…there is nothing new under the sun.”  The lead for the NYT’s article, “Michelson Proves Einstein Theory” conflicts with the result stated, “Ether Drift is Confirmed”.  You see, in SR there is no aether to drift and in GR it is not able to cause a drift.  The Michelson-Gale results falsified a major component of Einstein’s SR theory.  But let’s not let facts get in the way.  The experiment was celebrated as affirmation of Einstein’s theory.  It was also expected to finally end speculation about whether the Earth was at rest or not.

However, there is one important aspect of the Michelson-Gale experiment that has not been adequately explained. The Michelson-Morley experiment was unable to detect any aether drift related to the Earth’s orbiting speed of 66,000 miles per hours.  On the other-hand, the Michelson-Gale experiment was able to detect aether drift relative to the Earth’s far slower rotation speed of approximately 1,000 mph.  How is that possible?  If the Earth is creating aether drift as it rotates how can it not be creating aether drift as it orbits at 66 times the rotation speed?  This has never been adequately resolved by science.  The rescuing mechanism of choice is that the fringe shift is an artifact of the angular velocity of the Earth’s orbit. That’s right, assume an orbiting Earth to resolve the rotation problem even though there is no proof the Earth orbits the sun.  Now that’s hutzpah.

In the interests of time I’ll have to move on to Part IV.  However, I want to leave you with two links that will reinforce what I’ve presented above.  The first concerns experiments conducted by French Physicist Georges Sagnac starting in 1911.  His experiment also verified the existence of the aether and measured its effect.  Use the below link to view an 8-minute YouTube.  It is interesting to note that the Global Positioning System and aviation navigation systems contain coding that accommodates the effects measured by Sagnac.  The rationalization is that these “local” systems work better when geocentrism is assumed.  Interesting indeed.

Next up Part IV – Truly, the Heavens Declare the Glory of God